This tour through the land of the Thunder Dragon takes us into Paro, in a picturesque valley.

Bhutanese society is free of class or a caste system. Slavery was abolished by the Third King Jigme Dorji Wangchuck in the early 1950s through a royal edict. Though, a few organizations to empower women were established in the past, Bhutanese society has always maintained relative gender equality. In general our nation is an open and a good-spirited society. Living in Bhutanese society generally means understanding some accepted norms such as Driglam Namzha, the traditional code of etiquette. Driglam Namzha teaches people a code of conduct to adhere to as members of a respectful society. Examples of Driglam Namzha include wearing a traditional scarf (kabney) when visiting a Dzong or an office, letting the elders and the monks serve themselves first during meals, offering felicitation scarves during ceremonies such as marriages and promotions and politely greeting elders or seniors.

This tour through the land of the Thunder Dragon takes us into Paro, in a picturesque valley. Paro is home to numerous monasteries, of which the most photographed is Taktsang Monastery, meaning Tiger's Nests. The Monastery literally clings to a vertical granite cliff drop of nearly 4000 ft. and overlooks the Paro valley and the river. Heading across Bhutan, we visit several monasteries, deep river valleys and ascend over mountain passes. One of the highlights on this tour is a visit to the subtropical area of Wangdue Phodrang with an ascent up Pelela Pass at 3340m where you can see wonderful view of Himalayan Mountains. We head via the Gangtey valley, winter home to the endangered Black Naked Crane.

send us your query frequent questions
OTHER BHUTAN TOURS

The cost of a medical evacuation from the mountain is expensive, which is why adequate travel insurance  is required on all climbs booked through us. Adequate, means you must be covered for 1) Trekking or hiking – this may sound strange, but many insurance list that as an exclusion.
2) Altitude up to 6,000 meters. Most travel insurance providers do not include this under their standard cover and often limit it to 3500m or less.
3) Sprains strains and physiotherapy – yes, many insurers exclude this; though ironically, this is what you will most likely need cover for.
4) Personal accident – this is the horrible part of insurance. Yes, you need to be covered in the case of death. We are often told by clients – “if anything happens to me, just leave me there.” It is not that simple. 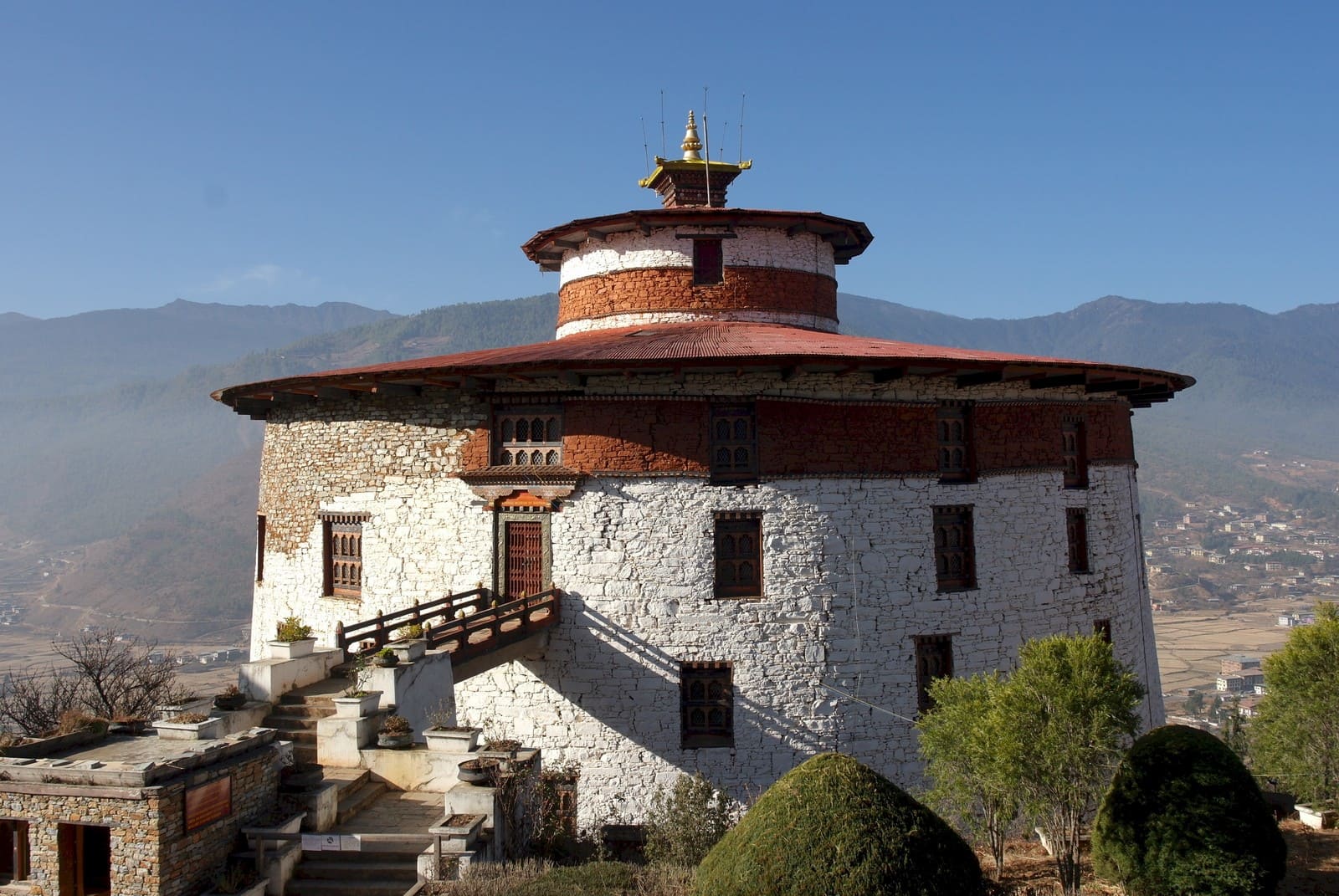 The flight into Paro is spectacular on a clear day as magnificent views of the world's highest peaks give way to the lush green Paro valley as you land. After clearing customs and visa control you will be transferred to your hotel.

Morning visit Drugyal Dzong (a ruined fortress), 16 kilometers away from Paro town. Although it has been in ruin this Dzong has its great historical importance for the people of Bhutan. It was a place where the Bhutanese finally defeated the Tibetan invasion and drove them back. On a clear Day one can view the sacred Mt. Jhomalhari (Mountain of Goddess). Visit Kyichu Lhakhang (Lhakhang means temple) which was built in 659 AD by the King Songtsen Gompo of Tibet as one of the 108 such monasteries he built in various places to spread Buddhism.

After Lunch visit National Museum which used to be a watch tower for Paro Rimpong Dzong (Fortress. It was converted into Museum in 1968. Visit Paro Rimpong Dzong, the Dzong was built in 1646 AD, and walk down to town one the way you can see the traditional wood bridge of ancient style. Visit a typical Bhutanese farmhouse and sightseeing trip to the Paro town. Hotel  Overnight:

Drive up to Satsam Chorten (10 km from Paro town) and from there walk up to Taktsang Monastery. The name Taktsang means 'tiger's Nest's. The Monastery clings to a vertical granite cliff drop of nearly 4000 ft. and overlooks the Paro valley and the river. It is said that in the second half of the 8th century, Guru Padma Sambhava known as the second Buddha in Bhutan meditated on this spot where the Monastery is situated having alighted there on the back of a flying tigress. Picnic lunch at the Taktsang cafeteria. The round hike takes about 4 hr. Hotel

Drive to Haa valley, Visit the small town in Haa which was recently open for tourism. It is located to the extreme western part of the kingdom and drive back from Chellela Pass where you can see beautiful snow capped mountains ranges and rhododendron flowers in bloom. A picnic lunch at Chellela passes. Visit Chellela Nunnery on the way back to Paro.

Visit Simtokha Dzong on the way. This is one of the oldest fortresses in Bhutan. It was built in 1629 AD. It houses the largest monastic schools in the country. Visit Tashichho Dzong, the main secretariat building. This massive structure houses part of the government Ministries, the office of the King and the Throne Room. It also houses the Central Monastic Body and the living quarters of the Chief Abbot and the senior monks. Lunch hotel in Thimphu. Afternoon: Visit the Memorial Chorten (a great stupa) built in memory of the Third King of Bhutan who reigned the Kingdom from 1952-1972. Visit the mini Zoo where the national animals were kept and drive to Sangeygang where you can have a spectacular view of Thimphu valley. Visit nunnery in Zulikha. Visit the Wood Craft and Painting school where traditional arts and crafts are still kept alive through the instructions of painting and curving. Visit the Handicrafts Emporium where Bhutanese textiles and other arts and crafts are displayed and can be purchased. Visit the National Library where ancient manuscripts are preserved.

Drive to Trongsa (200km) - the journey takes about 6 hours through Dochula Pass (3150m). On the way stop for a photo stop at Dochula Pass which is 26km away from Thimphu valley, and for Tea and snacks and to enjoy the most spectacular view of eastern Himalayan snow capped Mountains and also the great view of Gasa Dzong at a distance (If weather is clear) and descends down to subtropical area Wangdue Phodrang and again it ascends up to the Pelela Pass which is 3340m where you can see wonderful view of Himalayan Mountains and this Pass separates the western from the other regions of the country. Lunch in Chendebji.

Drive to Wangdue Phodrang via Gangtey valley which takes about 5 hours journey and it is a beautiful valley situated at an altitude of 3000m, this valley was open its route very recently. During winter one can see the endangered species of bird (Black Naked Crane). Lunch in Phubjikha and drive to Wangdue Phodrang.

Drive to Punakha town and Punakha Dzong. Punakha Dzong lies between two great rivers with the wonderful view of Punakha Dzong. The names of the rivers are Phochu (Male River) and Mochu (Female River). This Dzong serves as the winter residence for the Je Khenpo, Chief Abbot of the Central Monastic Body and also the office of the district Administration. Early lunch at hotel in Punakha. Afternoon drive to Paro.

Drive to airport for the final departure.

Why are tours in Bhutan so expensive compared to Nepal and India?

Bhutan has ‘High Value, Low Impact' tourism policy to preserve its cultural heritages and environment. Thus, with a high rate, it welcomes responsible travelers and few visitors. The policy is built on a daily “visa” fee of US$250 during the high season (which runs March to May and September to November), and US$200 during the low season (all other months). The amount sounds alarming, but is actually a minimum spending requirement that includes meals, three-star (minimum) accommodations in city hotels or countryside resorts, land transport, and guide service for every day spent in the country.

How difficult is the hike to the Tiger's Nest Monastery (Takstang)?

The elevation gain is around 530m or 1700 feet  so it is a substantial climb and takes around 5-7 hours in total. However it is  well worth the effort.  By doing this at the start of the tour it helps with acclimatisation.

What are the hotel standards in Bhutan?

Hotels in Bhutan are rated according to a National 5 star rating system. This does not mean all hotels are 5 star, but rather that every classification of accommodation from home stays to guesthouses, have to adhere to a set of government standards. As such, the standard hotels, lodges and guesthouses are usually good, often small and with a great ambiance. All tour operators are required to provide their guests with a minimum of 3 Star accommodations so you can be assured of your comfort. Most hotels provide their guests with television, room service, fitness centers, spas and wi-fi. However the exact services available will vary from hotel to hotel. The more popular tourist destinations like western and central

Bhutan usually have the higher standards of star rated European and Asian properties. There are a few luxury hotels and resorts, but they are rather expensive. If starting in Nepal, we spend two nights in 3-star, Thamel Eco Resort, well situated within the heart of Thamel, or, if it is full, a similar category in Kathmandu. At the end of the tour we return to the same hotel.

What plug points are used in Bhutan?

As a traveler from USA, Canada, Australia, New Zealand you will need an adaptor for types C, E, F, D, M, G.

As a traveler from England you will need an adaptor for types C, E, F, D, M.

As a traveler from South Africa you will need an adaptor for types C, E, F, G.

Do I need a visa for Bhutan?

Yes a visa for Bhutan is required for every foreign traveler and has to be processed by a local tour operator, as no foreign embassy abroad grants tourist visas. The visa cost is currently $40 and your passport must be valid for at least 6 months after you leave Bhutan.

Is English spoken much in Bhutan?

English is commonly spoken, as it is the medium of instruction in schools. The national and official language of Bhutan is Dzongkha. Road signs and government documents are written in English and Dzongkha, and the national newspaper is printed in English, Nepali and Dzongkha.