From the heights of the High Atlas and the forests of the Middle Atlas Mountains, to a camel trek across the epic dunes of “the Moroccan Sahara”, and from the romance of all four of its imperial cities, with their oriental palaces, mosques and mausoleums within, to the wild waves of the Atlantic Ocean crashing on Morocco’s west coast.

Known as the 'Gateway to Africa', Morocco is a dazzling yet dizzying destination. A diverse country with something for all kinds of intrepid travelers, there is no bad time to visit Morocco. The Kingdom of Morocco is rich in history and culture, offering travelers intriguing historic sights and authentic cuisine.

This incredible ​adventure across Morocco gives you a chance to have the best of everything, from trekking in the Atlas Mountains to see the major sights.

Take on a camel trek across the epic dunes of “the Moroccan Sahara”, and see the romance of all four of Morocco's imperial cities, with their oriental palaces, mosques and mausoleums within, to the wild waves of the Atlantic Ocean crashing on Morocco’s west coast. All this and an overnight stay in Toubkal National Park in the small Berber village of Tamatert with views of Mount Toubkal, north Africa’s highest mountain. 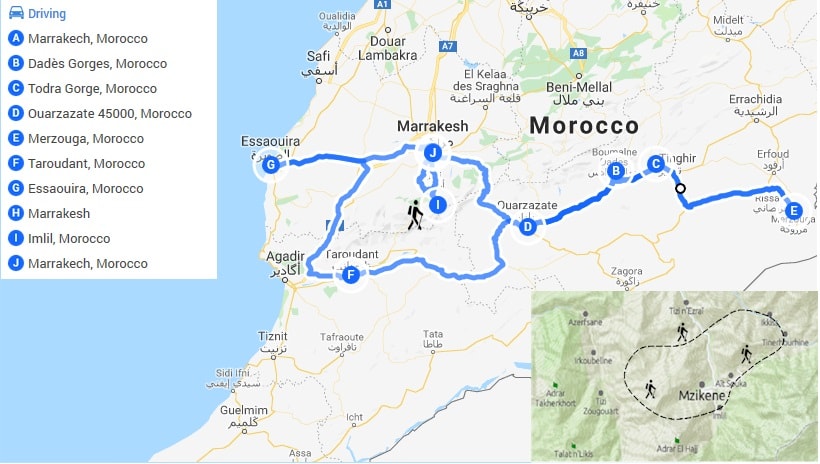 send us your query frequent questions
OTHER MOROCCO TOURS

Pick up from Marrakech Airport and transfer to the Riad to spend the first 2 nights. 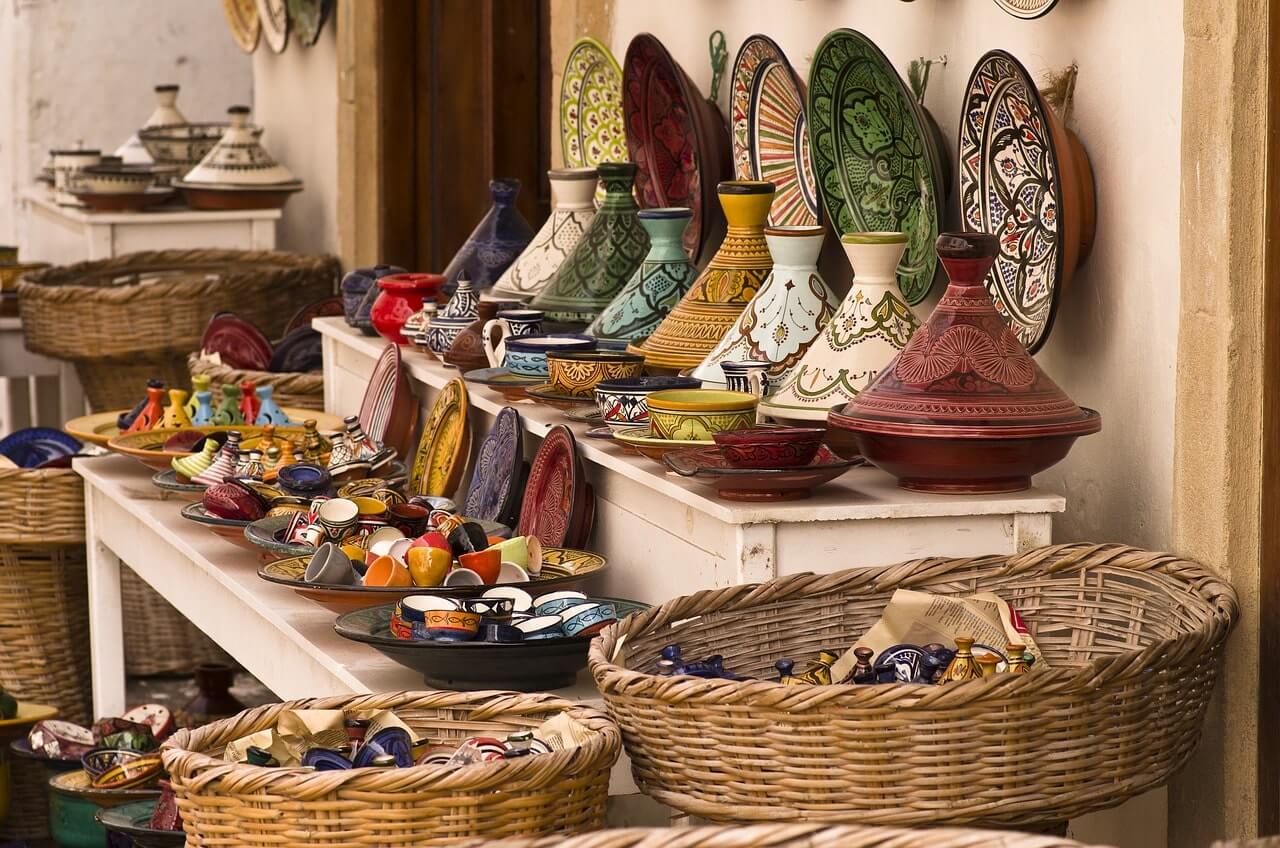 Marrakech dazzles the senses. A morning sightseeing will introduce you to its delights. Highlights include the marvelous Jemaa El Fna Square - once a site of public execution, now full of storytellers and snake charmers; the Saadian Tombs, Bahia Palace, Ben Youssef Medersa and the beautiful Majorelle Gardens.

We drive from Marrakech and depart to Aït Benhaddou over the High Atlas mountains passing through the spectacular Tizi n'Tichka pass (2260m). Aït Benhaddou is a small town with one of the best-preserved and most sought-after Kasbah's to visit in all of Morocco.   Here you can visit the UNESCO World Heritage-listed Ksar at Aït Ben Haddou. Stay in a Riad/guesthouse. B/D

After breakfast we drive to Ouarzazate and stop near the Atlas Film Studios for a photo then continue to Ouarzazate center for a panoramic view of the Kasbah of Taourirt. Driving towards Todra Gorges passing by Kelaa M'gouna, Boumalne du Dades and stopping for a panoramic view of Dades valley. Later on, we continue to Todra gorges via Imider and Tineghir. Stopping along the way for photos and admiring the views. Arrival to Todra Gorges to enjoy its marvelous Canyons views. B/D

In the morning you have free time for walking in the beautiful area of the Todra Gorges. In the afternoon we drive via Tinejdad and Erfoud to the captivating dunes of Erg Chebbi, these dunes are called also Merzouga Dunes. Arrive to the auberge and get ready for a camel trek for an hour and half to enjoy the sunset. While on your dromedary, you continue to the camp for an overnight in traditional nomad tents. Dinner and spend the night in a bivouac in the middle of the dunes. B/D

Wake up early morning to enjoy the sunrise from the top of the dunes in the Sahara Desert and ride on camels back to the auberge where there is a chance for breakfast and a shower. We depart to Errachidia via Erfoud, Aoufous and the valley of Ziz then stopping for a panoramic view of the oasis of Aoufous in the Tafilalte region Continue to Midelt across the pass of Tizi N'talghamt and have lunch break. After lunch we drive to Fès  via the Cedar forest near Azrou and the mountain of the middle Atlas with the possibility to see the Barbary apes. You may have a stop in Ifrane (the Switzerland of Morocco) before arriving to Fès where you spend 2 nights in a riad.

Enjoy a morning medina walking tour, with free time in the afternoon to explore more of Fès. The Fès medina is the world's largest living medieval medina and a UNESCO site. Explore the artisan quarters, sample treats from the carts, and view Fès' famous leather tannery from above. In the evening, opt for dinner in a converted riad complete with local specialties, music, and belly dancing or visit a local hammam to chat with the locals. Additional Notes: Only certified local guides are allowed to act as guides in the medina, so your CEO cannot go with you to the medina during free time.

After breakfast we co 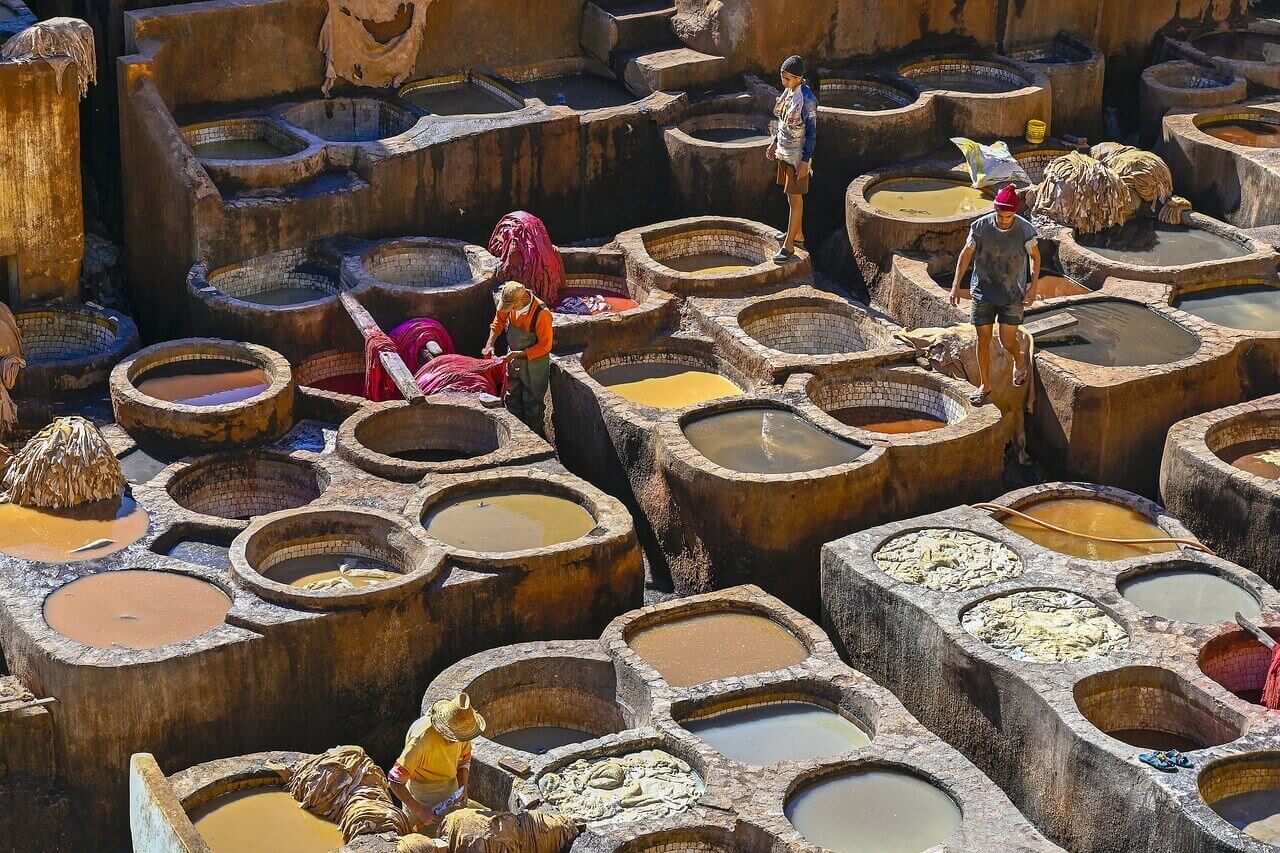 ntinue via the beautiful sceneries of the Rif Mountains to reach 'the Pearl of the North', 'Chefchaouen'. Here you can explore the blue city of Chefchaouen known for its blue-washed walls, a testament to the Chefchaouen's rich history. Morocco's blue city attracts travelers and Moroccans alike, both of whom are intrigued by this enticing and unique place. The blue-glazed houses and buildings were build originally by the town's former Jewish population. Chefchaouen was one of the cities that helped Moriscos and Jews who sought refuge after the Spanish Reconquest in medieval times. Moulay Ali Ben Moussa Ben Rached El Alami and the exiles used the fortress of Chefchaouen to fight off the invading Portuguese who were entering Morocco from the north. In 1920, the Spanish seized Chefchaouen to form part of Spanish Morocco. Spend the night in a guesthouse.

Departure to Meknes, and visit the imperial city with its famous door, Bab El Mansour, the mausoleum of Moulay Ismail and the basin of Agdal. You will have a chance to enter the ruins and walk around the Roman ruins of Volubilis located about thirty kilometers from Meknes and holy city of Moulay Idriss, pilgrimage center of any Moroccan. Overnight in Meknes.

We drive from Meknes to Rabat, the political capital of the country where you get a chance to see the Hassan Tower, Mohammed V Mausoleum and Oudaya Kasbah. After that we drive further to Casablanca. Overnight in a hotel.

Morocco is a Northern African country, bordering the North Atlantic Ocean and the Mediterranean Sea, between Algeria and the annexed Western Sahara. It is one of only three nations (along with Spain and France) to have both Atlantic  and Mediterranean coastlines

Is Morocco Safe to travel to?

Morocco is a safe place to visit but like most places have their share of scam artists and pickpockets. There are also a few unlicensed guides in major cities like Fez and Marrakesh so make sure their license is valid before    you employ them. And when it comes to any service, negotiate the price before you start out.

How should we dress in Morocco, especially women?

Morocco is primarily a Muslim country so the dress code is quite conservative, The locals do not walk around in short skirts or sleeveless tops, regardless of how hot it is. Most women wear burkas. As a tourist, women should  wear skirts and dresses below the knee, jeans or slacks, even leggings with a long shirts. Sandals are preferable. Yes there'll see tourists wearing skimpy attire but it calls for unwanted looks and is disrespectful to their culture.

What is a Moroccan Riad?

Riads or Ryads are eighteenth or nineteenth century family houses, usually found in the medinas of the major towns and cities in Morocco such as Marrakech, Essaouira and Fez.  Many have been converted into hotels and offer visitors to Morocco the chance to stay in authentic accommodation hidden away behind front doors. Riads are typically 4-10 bedrooms in size, and conform to a traditional Moroccan architectural style that sets most of the major rooms of the house around a courtyard  with no windows to the street side. The courtyards often contain a garden or small swimming or plunge pool, and gives guests a cool and private inner area within the property. Most also have rooftop terraces.

What is the best month to travel to Morocco?

The best time to visit Morocco is during spring (mid-March to May) or fall (September to October). The weather is warm but pleasant, unlike the cold temperatures and snow of winter, or the scorching heat of summer. The desert  is just too hot during June to September. The coastal regions can be visited year-round. the best time to visit is during April and May or September to November, the country's shoulder seasons. During these months, the climate is neither too hot nor too cold, and there are fewer tourists to contend with than there would be during the peak summer or winter vacation periods. A dusting of snow is not unusual in northern Morocco and, of  course, the Atlas Mountains are prone to heavy snowfall in winter.

What currency is best to use in Morocco?

Although the Euro, US Dollar and, to a lesser extent, Sterling are accepted in certain tourist areas, the Moroccan currency (the Moroccan Dirham) is required for daily use. In the major centres like Fez and Marrakesh, Euro can be used instead of Dirham. However in the more remote area you need Dirham. Dirham can be easily purchased within Morocco from the bureau de change in airports, major banks or from cash machines. Using a debit card at an ATM is often the easiest and cheapest method. In the country side and smaller towns cash points are rare and cards are often not accepted.

Do I need to know French or Arabic to visit Morocco?

While having a knowledge of these two languages is great, but trying to learn Arabic before you arrive may provide difficult. Our recommendation would be to rather learn some basics in French. Many people do however speak English  and if they can't there is most often someone on hand to help translate.

What are the current entry requirements for Morocco given COVID

Passengers travelling to Morocco must present a vaccination pass and a negative PCR test result less than 48 hours old before boarding the plane.

It should be noted that all vaccine passes issued by other countries are accepted as long as they are valid in their country of emission.

Before boarding, passengers must present a health form, duly completed including the passengers address and two telephone numbers to locate them during their stay.

Upon arrival at airports, they will be screened by rapid tests. Random PCR tests will also be conducted for several groups of travelers and results will be communicated at a later date.

Within 48 hours of entering the country, some travelers will be required to take an additional test at the hotel or residence center.

If the tests are positive, other preventive measures will be implemented.