One of the biggest festivals of Bhutan, Paro Tshechu is held at Rinpung Dzong to celebrate the birth anniversary of Padmasambhava also known as Guru Rinpoche

Tshechus are large social gatherings, which perform the function of social bonding among people of remote and spread-out villages.  ​One of the biggest festivals in the country is the Thimphu Tshechu. This festival is held in the capital city for three days.

The Tshechu is witnessed by thousands of people, both local and tourists. The actual Tshechu is preceded by days and nights of prayer and rituals to invoke the gods. Mask dances like the Guru Tshengye (Eight Manifestations of Guru Rinpoche), Shaw Shachi (Dance of the Stags) and many more are performed. one can create good karma and move forward to enlightenment, the ultimate goal of Buddhists.

This Tshechu is witnessed by thousands of people many of which travel from neighboring Dzongkhags (districts) to attend the festivities. The actual Tshechu is preceded by days and nights of prayer and rituals to invoke the gods.

The deities of the Tantric teaching are invoked during these dances. Through their power and benediction, all misfortunes are annihilated, and peace and happiness reign. When it was initiated by the 4th Desi, Gyalse Tenzin Rabgay in 1867 the Tshechu consisted of only a few dances being performed strictly by monks. These were the Zhana chham and the Zhana Nga chham (Dances of the 21 Black Hats), Durdag (Dance of the Lords of the Cremation Ground), and the Tungam chham (Dance of the Terrifying Deities).

send us your query frequent questions
OTHER BHUTAN TOURS

The cost of a medical evacuation from the mountain is expensive, which is why adequate travel insurance  is required on all climbs booked through us. Adequate, means you must be covered for 1) Trekking or hiking – this may sound strange, but many insurance list that as an exclusion.
2) Altitude up to 6,000 meters. Most travel insurance providers do not include this under their standard cover and often limit it to 3500m or less.
3) Sprains strains and physiotherapy – yes, many insurers exclude this; though ironically, this is what you will most likely need cover for.
4) Personal accident – this is the horrible part of insurance. Yes, you need to be covered in the case of death. We are often told by clients – “if anything happens to me, just leave me there.” It is not that simple.

The flight into Paro is spectacular on a clear day as magnificent views of the world's highest peaks give way to the lush green Paro valley as you land.

After lunch we will do some sightseeing around Paro, including a visit to the Ta Dzong Museum which houses religious relics, works of art and handicrafts offering a great orientation into Bhutan's historical, cultural, and religious past. We will then visit the Rimpong Dzong to see the painting of the great saint Milarepa Overnight Paro.

After breakfast, drive to Tashichhodzong to attend the Thimphu festival. Tashichhodzong, 'the fortress of the glorious religion's. Initially erected in 1641 by Shabdrung Ngawang Namgyal, it was rebuilt in the 1960s during the reign of Bhutan's third king in the traditional style, without plans or nails. Here, locals dressed in their finest clothes come to attend the festivities.

During the festivities, masked dancers dance, pray and tell stories of good triumphing over evil, as well as stories of the significant historical events surrounding the life of Bhutan's patron saint, Padmasambhava (also known as Guru Rinpoche).

Enjoy a morning of sightseeing, including a visit to 12th century Changangkha Temple, and the National Memorial Chorten depicting the Buddhist faith in the form of paintings and statues. In the afternoon return to Tashichhodzong to experience the colourful events of the Thimphu festival. Overnight at your hotel in Thimphu.

Today we drive over the Dochu-La pass (3,100 meters), which on a clear day offers an incredible view of Himalayan peaks before descending into balmy Punakha valley (about 3 hrs total driving time). The drive through the countryside affords a glimpse of everyday life in this most remote of Himalayan kingdoms. In the Dochu-La area there are vast Rhododendron forests that grow to tree size and bloom in late April/early May covering the mountains in a splash of colour.

Punakha was the ancient capital of Bhutan. On arrival, visit Punakha Dzong, the "Palace of Great Happiness" built in 1637.

After lunch, enjoy a walk to Chimi Lhakhang, temple of the Drukpa Kuenly who is also known as the Divine Madman. He taught the people that religion is an inner feeling and it's not necessary that one should be an ordained monk. He is also considered a symbol of fertility and most childless couples go to his temple for blessing. Overnight at your hotel in Punakha/ Wangduephodrang. 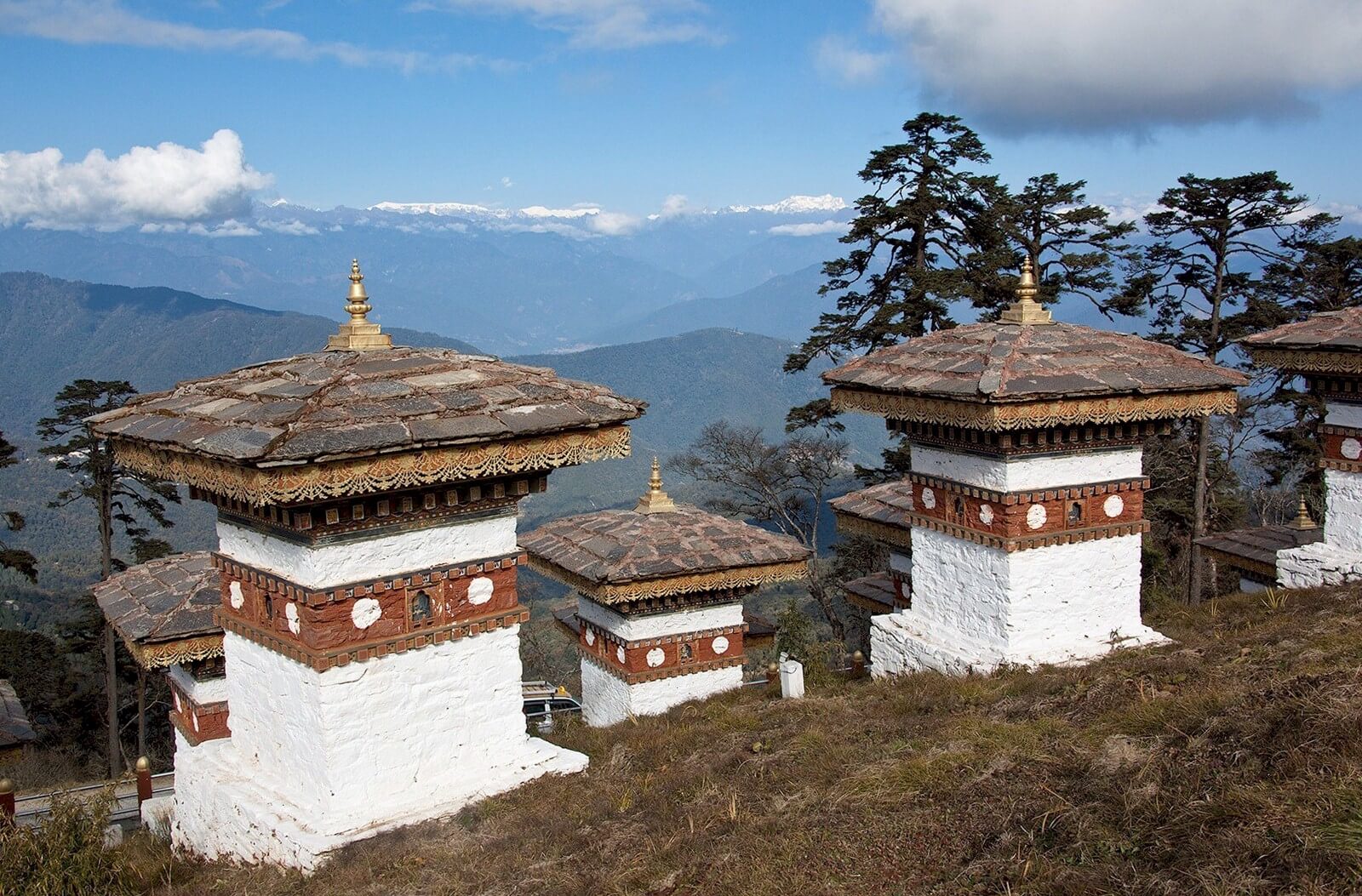 Following an early breakfast, we will go to see the early morning blessing from Thangka of Guru Rhinpoche. Today is the most auspicious day of the festivities and dances of the Heroes, Ging and Tsholing, the Eight Manifestatons, the Sixteen Fairies and the Religious Song are all performed in a magnificent cacophony of sound and color.

During the day you visit the National Museum, housed in the Ta Dzong (watchtower). Here is an intriguing collection of artifacts which provide you with a wonderful insight to the rich culture and heritage of the Kingdom of Bhutan. In the evening you will travel to Thimphu.

In the morning drive to Yabesa village and hike  through rice fields and up to Khamsum Yueley Namgyal Chorten. Perched high on a hill on the bank of the river, the Chorten houses paintings belonging to Nyingmapa Traditions.

Drive back to Thimphu where you will visit The National Library housing the collection of Bhutanese scriptures dating back to the 8th century and a fascinating replica of a medieval farmhouse at the Folk Heritage Museum. If your visit to Thimphu coincides with the weekend, you can walk through the Thimphu Market to see the variety of food of Bhutan, including basket upon basket of fiery chillies, fresh cheese and a variety of fresh greens. In addition, many stalls contain Bhutanese handicrafts and household items.

Afterwards proceed to Paro. Overnight at your hotel in Paro.

After breakfast hike to Taktsang Monastery. The trail is broad and the walk of approximately 2 hours uphill takes you almost a kilometre above the Paro valley floor (for those who cannot hike we will arrange a horse for transfer up to the viewing point). The view of Taktsang Monastery built on a sheer cliff face 900 metres above the valley floor is a spectacular sight. The Monastery is also an important pilgrim site for the Buddhists. The great Guru Rimpoche is said to have flown here on the back of a tigress when he brought the teachings of the Buddhist Dharma to Bhutan in the 8th Century. He then meditated in a cave  for three months where the monastery was later built. Nearby there is a teahouse where you can stop for refreshments.

In the afternoon drive to the ruins of the 17th Century Drukgyel Dzong, an historic monument built by the Shabdrung to commemorate his victory against invading Tibetans in 1644. In fine weather the towering peak of the sacred Mount Jomolhari (7314m) appears as a stunning backdrop. On the return drive to Paro, visit 7th Century Kyichu Lhakhang, one of the 108 temples constructed by the Tibetan King Songtsen Gampo.

In the morning our staff escort will bid you farewell at Paro airport.

What are the common practices of Tshechu?

They were used to convert opponents of Buddhism by performing rites, reciting mantras and finally performing a dance of subjugation to conquer local spirits and gods.

What is a Tsechu

Tshechu are annual religious Bhutanese festivals held in each district or dzongkhag of Bhutan on the tenth day of a month of the lunar Tibetan calendar.

Why are tours in Bhutan so expensive compared to Nepal and India?

Bhutan has ‘High Value, Low Impact' tourism policy to preserve its cultural heritages and environment. Thus, with a high rate, it welcomes responsible travelers and few visitors. The policy is built on a daily “visa” fee of US$250 during the high season (which runs March to May and September to November), and US$200 during the low season (all other months). The amount sounds alarming, but is actually a minimum spending requirement that includes meals, three-star (minimum) accommodations in city hotels or countryside resorts, land transport, and guide service for every day spent in the country.

How difficult is the hike to the Tiger's Nest Monastery (Takstang)?

The elevation gain is around 530m or 1700 feet  so it is a substantial climb and takes around 5-7 hours in total. However it is  well worth the effort.  By doing this at the start of the tour it helps with acclimatisation.

What are the hotel standards in Bhutan?

Hotels in Bhutan are rated according to a National 5 star rating system. This does not mean all hotels are 5 star, but rather that every classification of accommodation from home stays to guesthouses, have to adhere to a set of government standards. As such, the standard hotels, lodges and guesthouses are usually good, often small and with a great ambiance. All tour operators are required to provide their guests with a minimum of 3 Star accommodations so you can be assured of your comfort. Most hotels provide their guests with television, room service, fitness centers, spas and wi-fi. However the exact services available will vary from hotel to hotel. The more popular tourist destinations like western and central

Bhutan usually have the higher standards of star rated European and Asian properties. There are a few luxury hotels and resorts, but they are rather expensive. If starting in Nepal, we spend two nights in 3-star, Thamel Eco Resort, well situated within the heart of Thamel, or, if it is full, a similar category in Kathmandu. At the end of the tour we return to the same hotel.

What plug points are used in Bhutan?

As a traveler from USA, Canada, Australia, New Zealand you will need an adaptor for types C, E, F, D, M, G.

As a traveler from England you will need an adaptor for types C, E, F, D, M.

As a traveler from South Africa you will need an adaptor for types C, E, F, G.

Do I need a visa for Bhutan?

Yes a visa for Bhutan is required for every foreign traveler and has to be processed by a local tour operator, as no foreign embassy abroad grants tourist visas. The visa cost is currently $40 and your passport must be valid for at least 6 months after you leave Bhutan.

Is English spoken much in Bhutan?

English is commonly spoken, as it is the medium of instruction in schools. The national and official language of Bhutan is Dzongkha. Road signs and government documents are written in English and Dzongkha, and the national newspaper is printed in English, Nepali and Dzongkha.